This technique was already in use in pre-Roman Phoenician and Egyptian glass. It was later introduced in the Murano glass factories at the end of the 16th century or more probably in the 17th century, and broadly used in the following centuries.

It is obtained by applying vitreous threads while they are still hot around a blown object of another colour. The threads are then combed upwards using a metal utensil with a number of teeth called a sgraffon or manereta (a “comb”) and the resulting effect is a sequence of waves, feathers or repeated festoons. The object thus decorated is further heated, marbled on the metal slab and blown again. Towards the mid-1950s, Fulvio Bianconi enriched the Venini bestiary with different models, among which a series devoted to aquatic birds drawn in basic lines, some parrots and a series of cheerful farmyard animals. All these pieces have in common a highly refined glass technique. For the aquatic birds, he nonchalantly used an original variant of the Phoenician decoration — the “fenicio pisegà” (pizzicato [pinched] Phoenician) — with which he obtained a white undulating variegated texture that contrasts with the transparent body. Bianconi again used the Phoenician decoration to allude to the plumage of other animals produced in polychrome opaque glass. 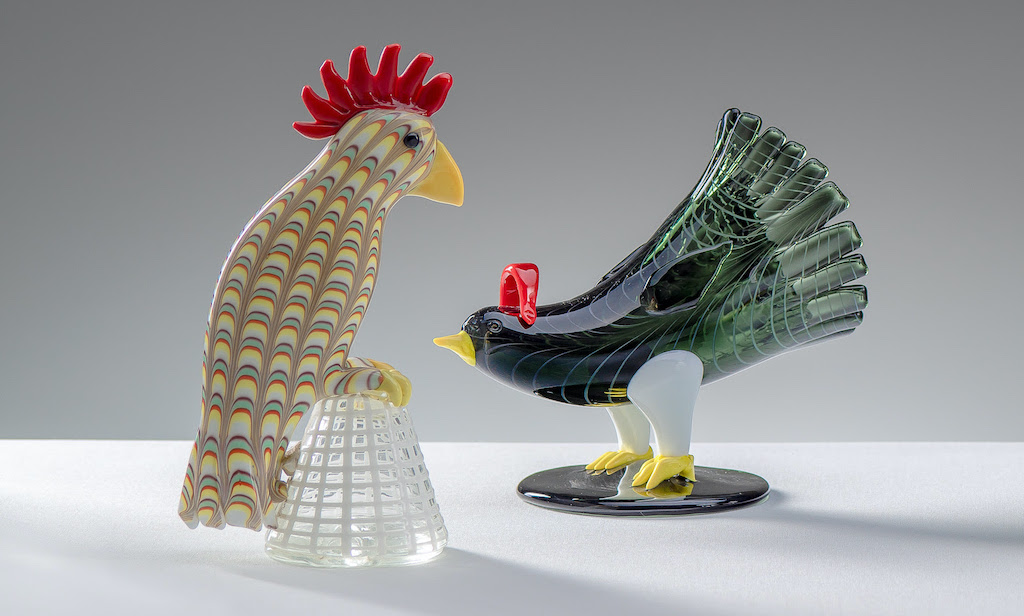